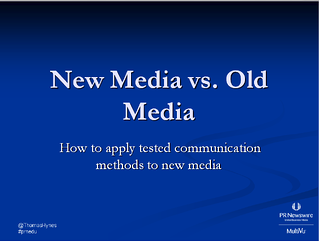 Interested in learning how to build relationships with key influencers? Jian Deleon of Complex Magazine and Thomas Miale, director of multimedia engagement at multiVU, offered tips for effective social media writing and the blog platforms of tomorrow during the PR Newswire webinar, “Traditional Media vs. New Media: It's Just Media.”

While many people are looking to define traditional media versus new media, both Deleon and Miale said it's all just media; the similarities between the two outweigh their differences. The objective of both is to reach target audiences.

The webinar discussion focused on how many people relate old media (or traditional media) with printed or broadcast media under banners such as New York Times, Associated Press and ABC. Gawker, Huffington Post, Mashable and Tumblr are blogs and platforms that experts consider to be new media.

So what's the difference? The media offered on digital platform is able to publish quicker. Deleon and Miale agreed that many of the old-guard properties, such as the Los Angeles Times and The Atlantic, are reinventing themselves on Tumblr. One key thing to note, they said, is that bloggers who republish material have been beating newspapers at their own game.

Bloggers want to be engaged, and they want to get the story right. When reaching out to a blogger, make sure you understand what he writes about and what he may be interested in. Doing your research is the most important thing when engaging a blogger. Don't pitch a crib product review to someone who writes a gluten-free blog.

One effective pitch is better than 200 bad ones. So here are some tips on how to successfully pitch media: