These were a few of the word associations Jason Robins, CEO and co-founder of DraftKings, made rapid fire when put on the hot seat by Sarah Hodges, partner at Pillar VC and co-founder of Intelligent.ly, during this week’s Leadership and Libations event. Getting candid about his challenges with starting DraftKings, particularly with securing funding, and the lessons he’s learned along the way, Robins’ insights and “realness” were refreshing and appreciated by the audience of local entrepreneurs, aspiring leaders and tech enthusiasts. 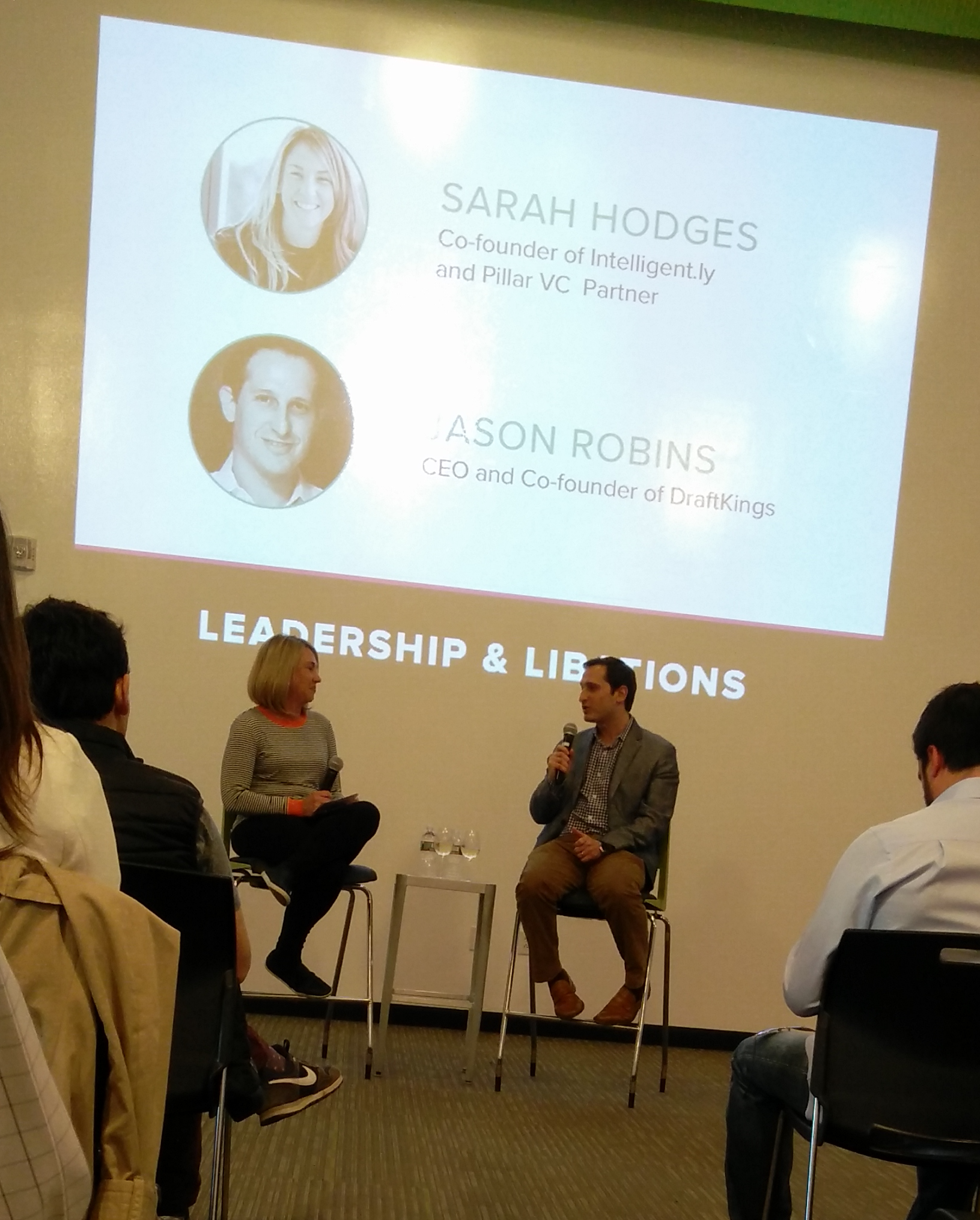 Some takeaways from the event include:

1. Asking for feedback: Robins shared his struggles with working a full-time job while starting DraftKings on the side, and how that may have impacted his ability to land initial seed capital – how can he convince people to invest money into this idea that he wasn’t even working on full-time? After bombing a meeting with potential investors he thought he had already won over, Robins sought advice from one of the VCs about what he did wrong and could do better. Even though Robins didn’t get what he originally wanted – an investment – the feedback helped him adjust his approach to pitching investors, which clearly worked, since DraftKings has received more than $715 million in funding since 2012.

2. The importance of targeting: One piece of advice Robins received from the VC he had struck out with was to do his homework and actually research the investors he was pitching. On the surface, these investors looked like the right fit – they had funded emerging technologies in the past. But after further investigation, he found they were actually focused on unrelated industries, like solar technologies. Robins learned how important it is to make sure you’re going after the right investor with the right pitch and messaging – a lesson we’re familiar with in the media relations world, as well.

3. Finding time to pay it forward: When asked how he manages to balance his time between running DraftKings, being a dad and still contributing to the startup community, Robins talked about time management and focusing on both the long-term strategy and the here-and-now. He discussed keeping the goal in mind, but getting through the short-term tasks to get there, including pivoting as necessary. In discussing why he feels it’s important to give back to the community when he’s already juggling so much, Robins commented on how he couldn’t have gotten to where he and his company are now without the support of others – friends, families, investors, mentors, etc. – so he wants to help out when he can whenever someone asks.

4. Persistence pays off: A recurring theme from Robins’ fireside chat was his feeling of not quite having made it – still. He still hasn’t had that moment of feeling like DraftKings is a complete success, but on the flip side, he has had many moments of doubt – that this was the end of the road for DraftKings. Robins felt this way when faced with difficulties securing the seed and A rounds of funding, as well as when state legislators across the country sought to impose strict regulations against fantasy sports sites. And of course, there were other smaller hiccups along the way, including disagreements among the three co-founders. Despite this, Robins kept a positive perspective on everything. For a first venture, having achieved what he has, even if it all went away, has been worth it, if just for the experience. But at the same time, Robins stressed the importance of finding ways to overcome obstacles along the way and being persistent – which Robins believes every startup needs to do in order to find success.